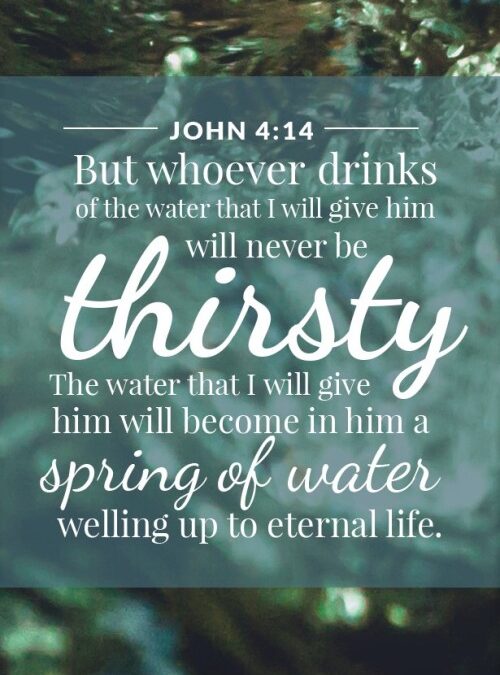 Climate change is a hot topic today. Some predict that the next wave of global legislation will center around this crisis and attempt to harness the human behaviors that contribute to it.

Scientific and environmental studies show that air pollution is heating the planet up and causing all sorts of bad side effects. The most alarming problems center around Earth’s water.

On the Cross, Jesus cried out, “I thirst.” The all-night beating and interrogation had taken its toll. Besides, He was personally carrying the weight of all humanity’s sin as His body suffered the brutality of Roman whips, metal spikes, and the roughly fashioned cross He had been forced to haul through the streets.

In a similar way, the whole earth is longing for something:

The world is slowly recovering from the devastation of Covid-19 and the disruption of life as we all knew it. We won’t soon forget seeing refrigerated morgue trucks parked outside hospitals as the death toll surpassed their capacity.

It’s hard to ignore the words of Jesus as he warned about the end of time:

For all creation is waiting eagerly for that future day when God will reveal who his children really are. Against its will, all creation was subjected to God’s curse. But with eager hope, the creation looks forward to the day when it will join God’s children in glorious freedom from death and decay. For we know that all creation has been groaning as in the pains of childbirth right up to the present time. (Romans 8:19-22)

Just as our lifestyles and industry are threatening the water sources on the planet, sin leaves humanity parched deep down inside. Jesus, who totally took our place, also experienced the agonizing thirst that separation from God brings.

In Scripture, the Holy Spirit is often compared to water.

On the last day, the climax of the festival, Jesus stood and shouted to the crowds, “Anyone who is thirsty may come to me! Anyone who believes in me may come and drink! For the Scriptures declare, ‘Rivers of living water will flow from his heart.’” (When he said “living water,” he was speaking of the Spirit… (John 7:37-39)

On the Cross, Jesus carried every sin, every sickness, and every symptom of our betrayal against the Father. The redemption He purchased with His life is absolutely complete. Jesus traded places with us, so the thirst He experienced made it possible for everyone to drink deeply of the water of life from Heaven. In Him, we can be completely refreshed and satisfied.

Jesus replied, “Anyone who drinks this [naturall] water will soon become thirsty again. But those who drink the water I give will never be thirsty again. It becomes a fresh, bubbling spring within them, giving them eternal life.” (John 4:13-14)

One day, God will create a new heaven and earth. The devastating effects of pollution will be erased. Rivers, lakes, streams, and oceans will be pure and clean. But we don’t have to wait until then to have our lives filled and saturated with the living water that Jesus offers.

Drink of Him today.

Faith Challenge: Are you trying to increase your intake of water every day? Each time you drink from your water bottle or have a glass of water, invite the Holy Spirit to fill you again and to water the dry areas of your life.